On the passing of a legend (Mr Lee Kuan Yew)

My facebook feed has been flooded with status updates, profile photo changes, and various shares and comments following the death of Lee Kuan Yew on 23 March 2015. As I was reflecting on some of this bombardment on Monday night, the first two lines of this poem formed in my mind. I then decided to try to build upon it, and what follows is a rough draft (which, in all reality, will likely never be worked on again) of some thoughts on the passing of a legend.


A nation mourns, a people cry
The death of mister LKY
I knew not he whom people grieve
Just that in him they did believe
Right man, right time; met SG's needs
#NoYewNoUs, their hashtag reads
By world's standards he's done a lot
His deeds and words won't be forgot
His legacy: this li'l red dot
Up in the world it quickly shot
I wonder what the future brings
A new world now, who'll be its kings?
Like all who live, his journey ends
His resting place, on God depends.

I was a bit hesitant about sharing it, given it was composed in all of about 15 minutes, and some of it felt a little bit forced. Plus, I'm hardly an authority on the man's life and history, so part of me was wary of coming across as ignorant / too simplistic. But hey, it's a poem, and there's poetic licence, and actually I think there's sufficient ambiguity in what I've written that it's not so easy to immediately pigeon-hole me into a particular camp when it comes to the spectrum of feeling about LKY. I will say this though, (and it's perhaps a bit of a random analogy, but I've been watching The Walking Dead, and there's some parallelism in the thought that) you don't get to lead (and keep leading with majority support) in difficult times without ruffling some feathers, getting some people off side, and making enemies. Of course dictators and despots could also fit this description, so I'll just leave that thought hang (and no I'm not saying that's what he was)...

Anyways, I posted it on facebook, and so far have gotten a number of likes, including from various Singaporeans in my network. I'll take that as some validation that the poem is not rubbish :p
thought by quop @ 22:34 2 comments:

I have a general aversion to paying for parking, so it's good that I don't often have to think about parking in Brisbane's CBD or surrounding areas. But when that need does arise those few times a year, it's a bit of an endeavour to figure out where best to park, balancing distance from where I want to go, likely availability of spaces (for on street parking options), and the costs. In the past I've used a combination of the carparking.info app or website, and google street view to look at on street parking signs. The latter is not always reliable as the information may be obscured, not clear enough to read when zoomed in, or plain outdated. This ipark map of all of Brisbane's parking meter locations would have saved me a lot of time and effort!

Another potentially useful resource is the Brisbane Parking Guide, where you can find information on parking deals and a map of (commercial) parking stations.

Brisbane recently conducted its "first comprehensive review of on-street parking management" and the report of this review and its recommendations are available (pdf) here. I've only had a brief skim, but it seems to be heading in the direction of good improvements. Part of the special offers flowing from the review is the availability of $5 evening and weekend parking at the two council operated carparks (King George Square and Wickham St). This is almost as good as the $4 offers available to RACQ members at Secure Parking locations, and the availability of such options makes a trip into the city more viable.

Email ThisBlogThis!Share to TwitterShare to FacebookShare to Pinterest
labels: batiyoh

It's been a while since I last looked at CTP, and the associated at fault driver protection policies. It's also been a while since I blogged, but that's a different story. I recently came across this deal on OzBargain whereby QBE is offering up to $50 for people to switch their CTP to them, and someone commented that Suncorp has a similar offer. So I thought it's time to re-survey the landscape. Here are some things I've noticed:
Here's a summary side by side comparison based on my skimming of the various policy documents, with the pricing from the MAIC CTP calculator. The providers are listed in best to worst ranking (by my reckoning). 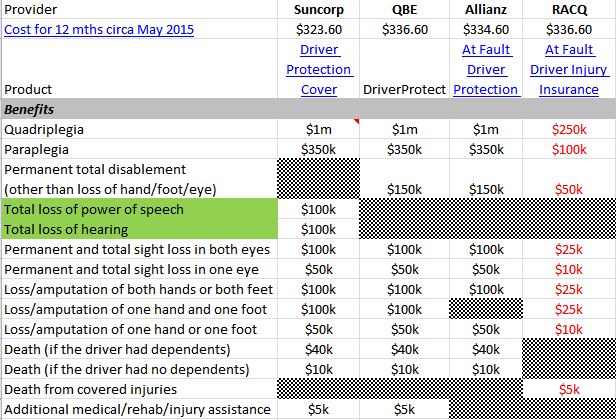 QBE will only give me $25 for switching to them, so that's a $12 overall benefit if I change from my current provider Suncorp. Assuming Suncorp still has their offer next year, I should be able to switch back to them and save another $50. Based on this, and assuming that things stay more or less the same in the coming years, I could just rinse and repeat this process for some easy savings... wonder why I didn't work this out earlier!
thought by quop @ 18:17 No comments:

Email ThisBlogThis!Share to TwitterShare to FacebookShare to Pinterest
labels: shopping

Some food for thought...

In case this embedding thing doesn't work, basically read this post and the articles linked there in: Post by Nathan Campbell.
thought by quop @ 22:54 No comments:

Self building lawn chair (and how it was done)

This is just a little bit ridiculous (in a good way). Firstly, see this stop motion story of a lawn chair getting built (seemingly without any human intervention):


Then, watch the video about how the stop motion video was made:

The woodworking for the chair itself was enough to impress me (I got as far as making a chopping board in my high school manual arts class). The stop motion video presentation of the chair getting made just took it to another level or three... bravo!
thought by quop @ 22:12 1 comment:

Email ThisBlogThis!Share to TwitterShare to FacebookShare to Pinterest
labels: videos

To do: find replacement to do app

Being forced to replace an app to which you've grown accustomed is, on the one hand, a first world problem, and on the other, a genuine frustration. Particularly so if the app works just about perfectly for your needs. Exhibit A: Google Reader. It wasn't that long ago I made the move to feedly, and whilst it wasn't all smooth sailing I've adjusted to the post-Google Reader/feedly way of life. Now it's Astrid's turn for retirement, and the hunt begins for a suitable replacement.

Features I was looking for:
Some of my research:
My shortlist of candidates and selected findings:
I liked the cleanness and simplicity of TickTick, but it was lacking in some features I wanted. Wunderlist is in some ways more complex/more bloated than what I need, but it offers some features that TickTick doesn't. Wunderlist also has a much larger user (and fan?) base and potentially greater likelihood of sustained future support.

I also briefly considered how I might extend my use of Evernote, or play around more with Google Keep, but they're notetaking apps and not to do apps. I also subsequently found out I could keep using Astrid offline / syncing only to Google Tasks (which was my syncing regime in any case), but figured I didn't want to be 'stuck' with old and frozen software.

This work is licensed under a Creative Commons Attribution-NonCommercial-ShareAlike 2.5 License.